I hope that you all had a wonderful Christmas. Over here in SLC it was pretty low key – lots of food, drinks and snow.

This was Christmas morning.

Waiting for the bus to work this morning.

Winter has definitely arrived. I even made it skiing on the day after Christmas. The morning was perfect. Not too cold. Beautifully soft snow and some ungroomed runs with some floaty powder. But by the afternoon the chill had set in, 11F with a real feel of -1F. That was it – when you get brain freeze from skiing (on the one little sliver of my face that was actually exposed to the elements) you know it’s time to call it a day. It helped that the ski lodge was serving hot cocktails – I had an apple pie (rum, butterscotch flavor and apple cider – and it tasted awesome).

On Saturday, J and I headed out for a long run. But where to go? The one thing I hate about winter running is the slippery sidewalks (I feel 3 times last year) so I wanted to run on some packed down snow. So we headed up to Park City and ran on East Canyon Road. Normally, it’s a low traffic dirt road and in winter it gets taken over by cross-country skiers. The conditions were pretty good. I only slid down one little hill (although I like to think I was surfing gracefully down) and no falls. But it was COLD. It took almost 2 miles for my fingers to warm up. I managed just under 9.5 miles. A couple of rolling hills. Not so great traction. But pretty views and it felt great.

And I finally made it back to the climbing gym. Now, that is a fun cross-training activity! Unfortunately, having not gone in months it was pretty messy – easy things felt hard and there was no elegant climbing flow – more like grunting and roughly launching myself from hold to hold. The climbing gym also has some treadmills that meant I could do a short run and get my weekly mileage up to 22. My last few weeks have been 15, 17, 20.5 and 22 so it seems as if this recovery thing is going pretty well.

Sometimes it’s hard to gauge progress. This is especially true for me when recovering from an injury. I want to be where I was in September. That is obviously not going to happen. So what I’ve been concentrating on is getting miles in and forgetting about pace. J (who qualified for Boston this year and who is super speedy) reminded me on our long run that the important thing is to build my miles and worry about speed later. This is after I asked him if he minded running with someone who is much slower than him. Speed doesn’t matter right now.

And looking at my mileage for the month – I’m pretty sure I’ll break 80 for December – which is amazing to me considering I’m coming back from injury, and compared to December 2013 where I ran 13 miles total for the whole month. These 80ish miles of running have come with a little under 7000 ft of elevation gain. So whatever about my speed right now – I am a much stronger runner than I was 12 months ago. 9.5 mile runs are no big deal. Trail runs (which I only started in April) are a regular part of my routine. My legs look and feel strong and lean. This is really exciting for my 2015. I’m starting from a much better place and I’m excited to see where I can go.

This was really clear to me after our ski day. The limiting factor for how many runs I get in on a day is my quads. After a while they start to burn (gravity can only do so  much to get you down that mountain). This year I was able to ski for longer, and on more challenging terrain (hello powdery, non-groomed runs) and still have fresh legs. This is huge. My injury might have pushed back my running fitness, but my leg strength is still there. I think one of the key improvements I’ve made is to do a short leg strengthening routine 3-4 times a week. This originally came from exercises prescribed to me by my physiotherapist but I’ve kept it up. And to be honest I usually do it in front of the television before I go to bed. It’s pretty simple and it’s hard to feel as if it’s really doing anything, but I know that this time last year I couldn’t run 22 miles a week, I couldn’t ski all day without wrecking my quads and those trail runs would be a big deal. I guess sometimes progress happens so slow that you don’t notice how far you’ve come until you look back at where you started.

Leg extensions with resistance band: Stand on one leg. Extend your leg directly behind you ten times. Then out at a 45 degree angle ten times. Then to the side by 10. And finally directly in front of you x 10. Switch legs. Repeat 3 times on each leg. You should feel this in your glutes.

Squat with resistance band: Start with knees over ankles. Move knees out to each side (not a big movement – just slightly out). Keep feet fully on ground. Repeat 30 times. Hold out for 30 seconds. Repeat 3 times. When my physiotherapist analyzed my running form she saw that my knees would fall inwards and occasionally rub off each other (I think this is common for women) and this exercise was designed to get my body used to keeping my knees away from each other.

Bridge: I will usually hold bridge pose for 3 x 1 minute.

Lateral leg raises: Lying on my side, one leg on top of the other. I will do a set of 90 of lifting my top foot up and down. Then 90 reps making a circle with your top foot – clockwise and then anti clockwise. Followed by 90 clamshells. Make sure you engage your glutes. It doesn’t matter how high you lift – just that you feel it when you move. Then I’ll repeat the whole set on the same leg before switching for two sets on the other side. This burns your legs – and works your glutes (min and max).

I also like to go reclining pigeon pose. And to do plenty of calf stretches. I usually will include a foot stretch where I’ll sit back on my heels.

And lately I’ve been adding single legs squats to my routine – just 3 x 5 on each leg to start.

Have you ever had progress sneak up on you?

It’s only a couple of days til my first race of the year and a little over a month to my 2nd half marathon ever. Man, this year is going SO fast.

Today I swapped out my tempo run for hill work. Lucky for me (?) I live near a ton of pretty decent hills so all I had to do was leave my house and turn right. It wasn’t a classic hill session but I ran up and down 5 pretty steep hills at about 80% effort for a total of 4.17  miles at about 9.08 min/mile pace (My garmin connector has disappeared so until my new one arrives next week I’ll be guestimating all of my paces and have no idea about elevation). It felt hard but not puke your guts speedwork hard and not nearly as awful as I remember from last summer.

Spring in Utah is pretty neat. It snowed yesterday and looked like this in the AM. 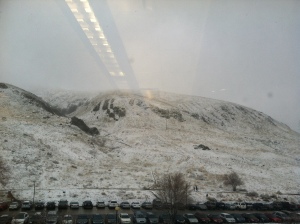 6 hours later – the snow is completely gone and today it is sunny and in the mid 50s again. Still dark in the mornings though – which has made me a little more tired than normal this week – so I’m going to switch to an after work run tomorrow. Yay for wearing shorts!

Yesterday I made a salad for lunch for the first time in forever – green leaves, half an avocado, some tomatoes, feta and leftover salsa verde chicken. J thought it was ginormous – I thought it was pretty much perfect!

I also believe that if I start eating salad I’ll trick the universe into thinking its summer.

Dinner was back to meatless Tuesdays. Tofu and veggie stir fry in a peanut sauce with egg noodles. I have to say that since I moved to the US I was surprised at how much peanut butter there is in everything. I was not a fan to start with (don’t hate me!) but I’m slowly coming around – especially when it’s cooked Asian style. Yum!

Day 9 – so far so good. I have a follow-up appointment with the PT to check up on my glutes and running form. I can’t really believe how much better I feel compared to just a week ago. I still have to think about why legs (and knees) when I’m running (trying to minimize knee touching) but it’s starting to feel more natural. Doing the PT exercises it’s still clear that my left leg and glutes are way weaker than my right. Asymmetry is bad. And who would have known it was so painful to lie on the ground and move your leg in circles? The burn. Oh. My. Lord. I hope it gets easier.

Last night I had a craving for some roasted broccoli. It’s one of my new faves – especially with some Parmesan. I also made some buffalo-style chicken which got the thumbs up from J.

Probably still need to cut down on my carbs.

But I am loving my cast iron skillet. Everyone should have one. 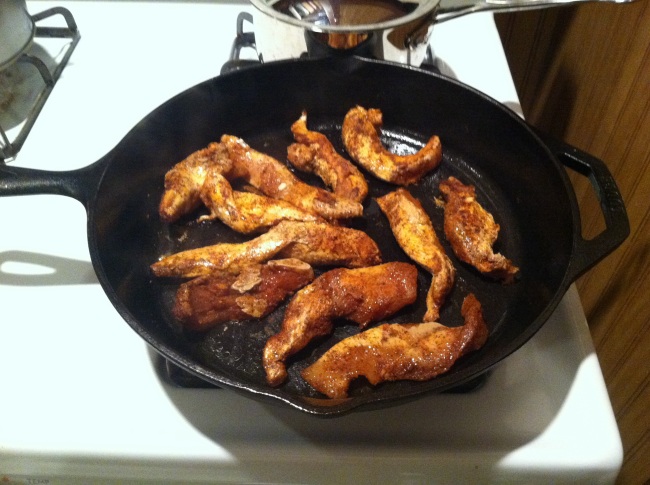 Last night we watched Mitt on Netflix. It follows Mitt Romney from 2008 until election day in 2012. I’m not a citizen so can’t vote here – and probably wouldn’t have voted for him anyway but it was interesting to get a taste of behind the scenes on a presidential campaign. I don’t know why anyone would put themselves through it. He seems like a good guy though. I liked that he picks up his grandkid’s garbage and makes sure all the lights are turned off before he leaves his hotel room. Maybe he’s a closet environmentalist. (Spoiler Alert: He loses (!)).

We got more snow this morning 2-3″. I was having my “Do I really want to get out of bed and go to the gym? I could just go later.” argument this morning. I know I never regret getting up and going and I always seem to regret staying in bed so I got up. I figure if I can get out and do this in the middle of winter I should have no problem in the summer.

Did a 45 min strength workout. Feel a little tired but I think that’s just because it was 6 AM. More snow due for most of this week but still hoping to run outside as much as I can. And maybe go skiing!