Being injured sucks. And it’s easy to wallow in self-pity and turn into a total Grumpy McGrumperson. My approach is to throw a little pity party, feel sad and frustrated – and then move on. Focus on what I can do – crosstraining – and what I need to do – lots of hip stretching – to stay healthy and sane. I also wanted to keep myself in the loop and experience a new part of the running community. So I volunteered.

I had my first race of the year scheduled for Saturday (and my first ever road 5K), but my physiotherapist suggested that I needed to take 2 weeks off running (and when she talks I listen) so I knew I wouldn’t be able to run. I decided I still wanted to be part of the event and emailed about volunteering. It turns out that race directors LOVE volunteers and I got an immediate reply and was told to report to the race at 7 AM on Saturday morning. I still picked up my race packet on Friday (if I am going to pay $25 for a mug you bet I’m going to go and pick that sucker up). I had registered for the entire 3 race series and also qualified for a $25 gift certificate for the running store that was hosting the races. How awesome is that?

Race day was beautiful -> 58F at 6.30 AM (this is not normal for February in Utah!) but just a little windy. I arrived and collected my volunteer shirt – it’s totally cool and is a Brooks tech shirt pretty similar to the one I picked up at Twin Cities last year. Plus volunteers also get a $10 gift certificate. Swag! 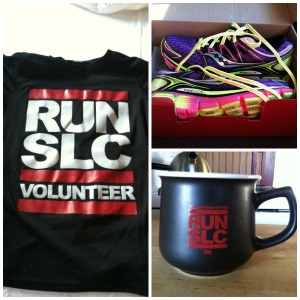 Volunteering sure pays off!

My job was to look after the post-race food and drinks. They had gotten a ton of free donut holes and hot chocolate from Dunkin donuts, plus some Nature Valley bars, oranges and a ton of bagels. We watched the runners head off and kept ourselves warm and away from the wind while they headed out for their 3.1 miles. The first man came in just a little under 18 mins and then we waited for the rest of the 200 or so other runners to cross the line. I’ve only race one 5K before and it was awful -> going out too fast and holding on (I think that’s how most people do it too?). And looking at the faces of the people as they finished – I was pretty glad that I didn’t have to run that morning. 5Ks are hard! We were all done by 9.40 AM and I headed to the gym for my own workout – 1 hour of strength and core work and then 1 hour on the bike (low resistance, high reps). Watching people give their all is definitely a great motivator to go and bring it at the gym! Although my glutes had a hissy fit and punished my with DOMS the next day.

I also managed to limit myself to one donut hole – mainly because I don’t really like donuts. I know this is a little controversial but I’m totally “meh” about them. Maybe I just haven’t met the right one yet?

You might notice my latest pair of shoes in my collage. I just started wearing my latest pair of Brooks PureCadence and wanted to get another pair (I like to have two pairs in rotation). I hit up the running store and got my gait analyzed. I am a neutral runner and asked to try on everything in the store. Well, I narrowed it down neutral shoes that work for someone with narrow feet (this can actually be a problem – especially if you need to buy ski boots!). I think I tried on at least 10 pairs ranging from 4-12 mm drops and minimal to maximal cushioning. Personally, I like to get a yearly check on my gait and see what’s new. I really liked the newest PureFlows but I felt that they were a little too similar to the PureCadence. Then it was between the Adidas Boost, Mizuno Wave Rider and Saucony Triumph ISO. After running on their treadmill I settled on the Sauconys – only a 8 mm drop (most traditional running shoes are 10-12 mm and my Brooks are 4 mm) but with lots of cushioning (but still felt surprisingly light). I’m thinking of using them as my long run shoe. Obviously, with my current calf strain they are sitting by my front door ready for their first trip outside. So look for a review sometime in March? April? May?

As for the calf strain…….It was still a little sore through Saturday morning. And to be honest I’m not sure if this was residual pain from the dry needling *SHUDDER* or my actual injury. Standing around by the donuts on Saturday morning seemed to aggravate it but it was fine after my gym session in the afternoon. Sunday I had my recovery swim followed by some soaking in the hot tub and was feeling good. I can still feel a tightness in my calf but it’s not painful. Plus, I’ve been attacking the huge knot in my calf with my torture stick. Ah the joys of being a runner!